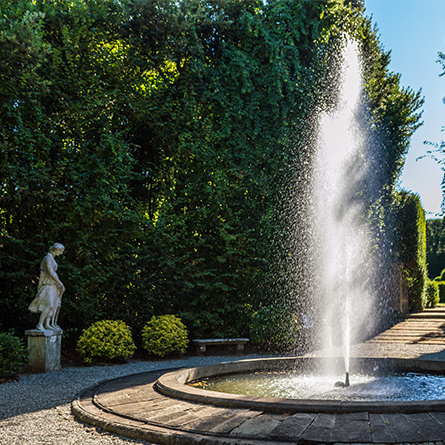 Many elements of Renaissance and Baroque gardens are drawn from antique theatre architectures. One particular feature that affirmed itself in the Baroque period is the teatro di verzura, a theatre space made with vegetation. As scenic metaphors, feats of topiary creativity, these outdoor spaces are veritable green translations of modern theatre architectures.

In dictionaries and architectural treatises, the teatri di verzura appear very late. The terminology was coined in 19th-century manuals.

An analysis of the spread of teatri di verzura garden theatres in Italy shows how this feature was mostly widespread in the area of Siena and Lucca: a concentration that coincides with an intense theatrical production within the academies. The earliest garden theatre is that of Marlia, consisting of a single elliptical space surrounded by a green corridor. 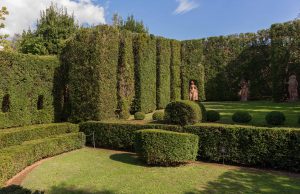 In a teatro di verzura, the theatrical dialectic between space and stage action appears reversed. Space is defined by an ephemeral material, vegetation transforming over time, while the theatrical action is perpetuated by the statues of mythical figures arranged at the sides of the stage, in niches set as backdrops (as for instance in Marlia and Collodi) or in aedicule-propylaeas (as at Villa Bianchi Bandinelli at Geggiano).

A teatro di verzura does not necessarily require an actual theatrical performance, since this space is first and foremost a display of topiary artestablishing a relation with theatrical illusionism. However, precisely because of the dynamic essence of the vegetation these elements do not respond to the real movements of the scenic artifice.

Of particular interest is the theatrical exedra in the Garden of Valva, the Theatre of Virtue and Honour of the Valva family, a take on the theatres designed by William Kent for Chiswick Gardens, the Temple of Ancient Virtue in Stowe, and its parodies. A significant precedent is the late-15th-century Garden of Venus at the centre of the island of Kythera by Francesco Colonna, described in Hypnerotomachia Poliphili. Shaped as a white-rose amphitheatre this garden is also a homage to Dante’s New Jerusalem.

The solution adopted in the Garzoni Garden in Collodi is unusual, with the small garden theatre on the margins becoming a synecdoche of sorts, a synthesis of the garden’s spatiality as a whole. The lower part of the garden has a mixtilinear layout relatable to the evolution of those theatre halls that in those decades would lead to the Bibiena experiments. The relation between the lower area and the upper hilly part is a stalls-stage relation, with a podium, proscenium, proscenium arch and stage sequence. The presence of two satyrs serving as pillars of an illusory proscenium arch with the water theatre at the centre, on which Fametowers, confirms the Vitruvian satirical (or satiresque) nature of the scene. 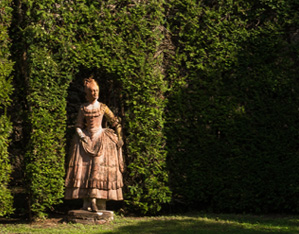 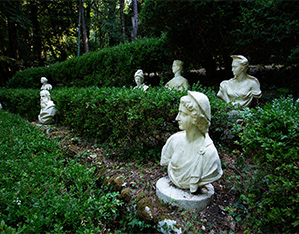